Food and eating in Spain

A look at Spanish food, cooking and eating habits

About-Spain.net is partnered with Europe's leading hotel booking portal, Booking.com, to bring you the best online prices
The Spanish way of eating

Hams and chorizos in a Spanish delicatessen
Spain is a hot country - at least in summer it is; and as in many parts of the world, it is country where climatic factors have played a big role in determining lifestyle, and - in turn - the whole organisation of daily life.
For those whose aim in Spain is to eat in fast-food outlets or city snackeries, the daily timetable of Spanish life is irrelevant; but for others it is not. For any other purpose than  lying on a beach, being in Spain means adapting to Spanish ways when it comes to organising your day; when in Spain.....
The Spanish day tends to start late, compared to other parts of Europe – which is normally no big problem for tourists. Hotels and cafés may not start serving breakfast - el desayuno - before 8 a.m, or even 8.30; and the process is often a leisurely one, since many people in Spain do not start work until 9 a.m. or even 10 a.m.
Spanish lunchtime, on the other hand, takes more getting used to. The "morning" in Spain runs on until 1.30 p.m or often 2 p.m., and it is only then that restaurants start opening up for lunch, which can generally be eaten until around 4 p.m.  After that, it is siesta time, until things start opening up for business again; depending on the place, afternoon shop-opening in Spain may start from 4.p.m onwards, but in some places shops will not open until 6 p.m - for a four-hour afternoon opening time. Consequently, it is rare in Spain to find restaurants opening up for dinner service before 8 p.m, and in many parts 8.30 or 9 p.m are the normal opening times for dinner.

Spanish restaurant opening times may go some way to explaining the Spanish habit of "tapas" - which are basically nibbles that people take either while they wait for lunch time or dinner time to begin, or else take instead of a more formal sit-down lunch or dinner.  A lot of Spanish restaurants are attached to café-bars, and tapas are served in the café - bar area, more formal meals in a room behind or upstairs or next-door.
Tapas - or slightly larger portions of the same known as raciones -  are ordered at the bar, and usually eaten with a beer or a glass of wine or some other beverage. Usually they are displayed in serving containers on the counter or behind it, so are easy to order even if you don't know hat they are called. Popular tapas include olives, mussels, Serrano ham or even Iberico ham, chorizo (Spanish sausage), small bean-based appetizers and a range of others depending on the region and the individual café-bar.  A popular tapa from Extremadura to Aragon is Migas, which are croutons (or old bread), sometimes egged, and deep fried in olive oil with bits of chorizo.

Valencian paella as a primero plato
As in most countries, restaurants tend to offer either a full menu or else a choice of dishes to be ordered à la carte.  The classic Spanish meal is a three course affair, firstly what is known as the Primero plato, then the main course known as the Secundo plato, and finally a dessert, called the Postre. While the choice and the extent of the choice will depend on the restaurant and the region, common primeros platos include "Sopa del dia" (soup of the day) , Sopa castillana (a substantial soup with beans and bits of ham and chorizo in it), Gazpacho (cold fresh tomato and cucumber soup), trucha (trout) or even a small serving of paella. Secundos platos are usually a meat course, with steak, chuletas (chops), chicken or even perdiz (partridge), or fish, 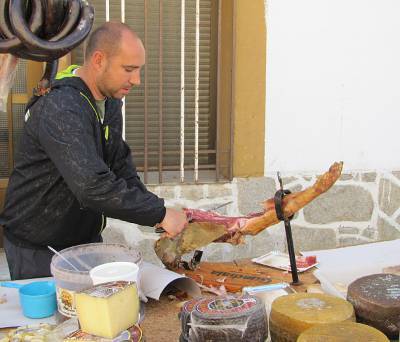 Cutting jamon ibérico on a local market
often served with either a salad, vegetables or pototoes - but not both at the same time. Diners wanting everything together on the same plate need to seek out a restaurant offering platos combinados - which include such international dishes as a mixed grill with steak, chips and tomatoes.
Postres, desserts, are not a great Spanish speciality: the most common ones are flan (caramel cream), rice pudding, ice-cream or fruit.
In ordinary to reasonably good restaurants, in 2017 a "menu del dia" (set menu with some choice ) will normally cost from about 8 € in small rural restaurants, to 15 € in better city establishments. "Menus" normally include wine or water or even una caña (a glass of beer), bread, and often coffee too, and are available for lunch and in the evening. Quality varies massively from restaurant to restaurant, and for 10 € - a common price in 2017 - you may get anything from a very poor meal with little to recommend it, to a delicious mouth-watering spread. On account of Spain's current economic plight, many good restaurants have started offering cheap menus del dia, just to bring in some customers.
For more Spanish dishes, see understanding the menu in Spain

A selection of Spanish specialities

Continue Discover more about Spain with ....
►  Moorish Spain   -   Roman Spain  -  Castles in Spain
Other pages of interest :   Travel in Spain
► You may also like : Food and eating in France

With much of the population living near the sea, Spaniards are very partial to fresh seafood 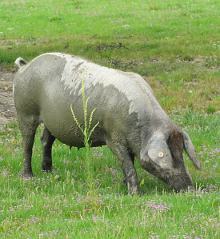